Rice Wine of the Year

Tuak and Its Reputations
Every year, the people of Sarawak celebrate the end of a successful harvest with rituals, dance and merrymaking.  It is a celebration of unity, hope and aspiration for the Dayak as they also usher in another year of bountiful goodness.

Among the mandatory items for Gawai is Tuak. It is a special rice wine, a drink for all occasions, be it Gawai, weddings or entertaining visitors. It is generally served during any sort of entertainment or festivities. When you arrive at any longhouse during the festival, the occupants will offer you Tuak as a welcoming drink. Hosts would often get offended if visitors refuse the offering but now they are more understanding as some religions forbid the consumption of alcohol of any sort.

There is, however, one big problem with Tuak.

Gawai is ushered in and out every year with so much merrymaking and festivities that we are forgiven to believe the after effects partially contribute to social disturbance and to a certain extent, social illnesses.  People have been associating Tuak and the distilled spirit, Langkau, as the root of alcoholism, social problems, negligence and backwardness among the Dayaks.

Looking from certain angles, these allegations may somehow hold fluids of truth.  The notion of drunken with Tuak has become a part of the Dayak culture.  Some only know one way of appreciating Tuak, which is to down it as much as possible, as fast as possible.  Others even measure the potential of Tuak by how quickly they get drunk by it, rated against the volume consumed.

As much as they try to deny the problem brought by Tuak and its distilled derivative, Langkau, they continue to go through the same drunken ritual year after year.  Considering the negative perception that “the only way to enjoy Tuak is to get drunk by it”, we believe there is hope in changing this negative mind set and prejudice.

By promoting different angles to the perception of enjoying Tuak, we hope the Dayaks would not focus on getting drunk but to learn and discern the complexities and chemistry  resulting from the careful fermentation of rice and the gentle hands of time.  It would act as a factor to divert the intentions of just getting drunk to ones of respect and appreciation.

Hosts would eventually learn to appreciate their guests differently by not getting them drunk to watch their antics but instead share the beauty of their hand made Tuak as much as the guests would in turn appreciate the respect and hospitality bestowed upon them.  Getting drunk would only be a matter of choice and conscience.

We also aim to educate the public especially the Dayaks themselves, that Tuak is not the problem; alcohol abuse and dependency is.

Also, looking at the current trend of Gawai in the longhouses and villages in Sarawak, tuak is rarely served in some places (Langkau however, is evergreen).  Besides Tuak and Langkau, all kinds of western spirits are also served in villages and longhouses.  Brands like Chivas, Jack Daniel, Johnie Walker, Jim Beam, Absolut, Smirnoff, Martell and Courvoisier are now household names.  Some parents even name their children after their favorite spirit.

So, tuak is hardly the culprit and it is time we raise the appreciation bar higher. 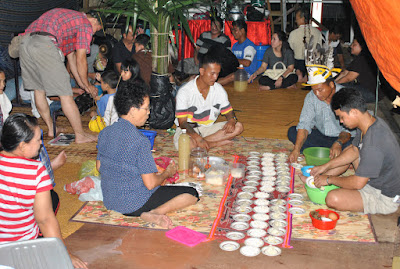 The main feature of Spirits of The Harvest is the ‘Tuak Of The Year’ competition.  It is a platform for Tuak makers and drinkers to share ideas and thoughts on the art of making Tuak and enjoying it.  The participants would have to adhere to certain terms and conditions before they are able to present their brew to be judged.  They are required to furnish certain declarations such as base ingredients, standard methods of preparation and alcohol content.

Spirits Of The Harvest brings together tuak and other alcoholic beverages in Kuala Lumpur during a night of culture and heritage.  It is hoped that Sarawakians and many others in Kuala Lumpur will share their appreciations towards different taste and tunes that they have grown accustomed to.

Cultural presentations such as ethnic dance, musical instrument performance and entertainment by Dayak artists add to the colours of Gawai.  Besides entertain, the presentations aim to inspire the audience to learn more about Dayak culture and Sarawak in general. This in turn inspires the younger generation to get in touch with their culture and heritage by being involved with different aspects in performing arts; a sense of belonging beyond borders.